… Or more like here are the problems I ran into.

In my last post I explained that the website was a work in progress. Well it’s not anymore, it’s done AND everything…

It’s an incredibly simple website of only a few pages but I’m really pleased with how it looks now. 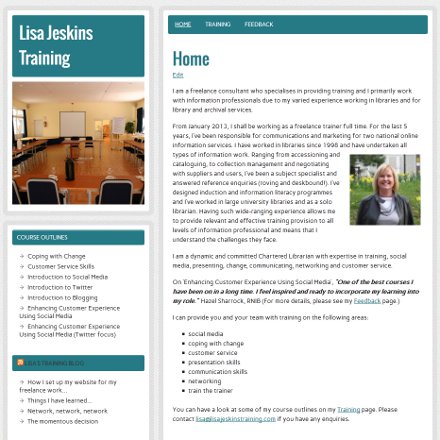 I used wordpress to set it up and yes it’s blogging software but it’s really easy to use and I use it for 4 work blogs so I’m pretty familiar with it now. It does what I need it to.

I originally hoped that I could use the free version of freehostia to set up my own self hosted wordpress blog but this meant that I couldn’t upload any of the themes that I found and would have had to have used one of the wordpress themes that comes with it. I wasn’t especially happy with the idea because I’d tried that already and as my firend Lisa Charnock said, “Well it’s ok. but only ok. It looks like blogging software and it doesn’t look very professional. I think you’re going to have to throw some money at it”.

So I did. (not loads tho) I upgraded to the higher freehostia package and then found a theme I really liked which was free but not created by wordpress so I’d have to upload it. (WordPress BizzCard Theme)

When I say ‘I’… I really mean that I got Lisa’s friend Scott Gilhooley to help. He was a star and very patient with my less than techy self. He basically tinkered a little with the background stuff.(technical term i’m using to describe transferring my existing content across and putting the theme on) He also set me up with a basic framework, which I could then edit the design and add my new content.

The biggest issues I’ve had it with were around my email address. I went about it in slightly the wrong order. I bought my domain name from wordpress without an email. Then I created a free email account with google apps linked to my wordpress.com site. Then I moved my website and became self-hosted. Which screwed it all up. I ended up using freehostia for my email as well, but because I wanted the same address that I’d used for the google app one, it took a bit of fiddling about with.

This is where Scott was particularly invaluable, I’d sent out some of my first lot of replies to training enquiries and was worried about missing replies, whilst my email was down. It was fine, I emailed everyone from my hotmail to let them know, but it added to my general nervousness about my new endeavour and didn’t feel very professional. Scott sorted it all out for me in the end. I just didn’t have the know-how.

If I had to do it again, I’d sort out some server space, a domain name and email from the start, probably with same company (other web hosting services are available. 😉 and as Lisa said, I would ‘throw some money at it’ from the beginning instead of trying to do everything for free. I’m sure you can do it all for free but it’s just easier, especially if you don’t have the technical wherewithal, not to. This blog post might feel little back to front, and that’s because I actually did it all back to front. 😉

Hope this helps, so that you can avoid the same pitfalls.

Oh and I now have business cards… 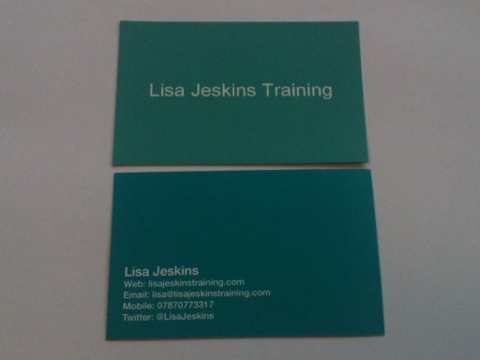