It sounds pretty obvious doesn’t it, but I do love the Internet. 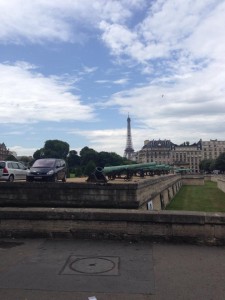 I’m going to be doing some training in French in September. My degree is in French and Spanish so my language level is pretty high but when you don’t practice every day, your level of language can become a little flabby. So I’m currently ‘in training’ for September.

I’ve been delighted to discover the amount language materials available on the internet, it’s a veritable smorgasbord (or should that be buffet?) of things to download.

I’m listening to French radio every day, there’s an app for that you see. It’s called Radios France and it allows you to listen to about 20-odd different radio stations including France Info (Like Radio 4) and it’s brilliant. I was listening to it whilst in the shower but my aunty, Pam, has persuaded me that this is where madness lies and that the steam could kill my iP@d.

I’m downloading any free French books I can and I’m reading them. (Although irritatingly I can’t download free books from the French site unless I transfer my country to France, so I’ve to deal with the slightly clunky searching on the UK one. I didn’t like to say to the person that was trying to help me that searching for “French books” isn’t all that great)

I’ve got a new telly thingymagig too and this means I’m recording all the French tv I can lay my hands on (subject matter: brothels and zombies)

I reading my Nouvel Obs app every day and also checking out Le Monde when I can. It’s all marvellous and so much easier than when I had to go into the language lab at Bradford every day to watch or listen to the news.

I’m following French tweets (or should that be tweeps) and have created a list of French tweets to read. and yes twitter is a verb. Je twitte, tu twittes etc.

I love it. But I realised that what I really wanted was more subject specific content, technology, social media, and stuff around business and customer service. Well essentially I just wanted MORE.

I thought – I bet Zite or Flipboard would be perfect. But it turns out that they don’t have language options as such. (Not that I could find anyway) After much huffing and puffing and ‘well that’s useless’ I had brain wave. I went into settings and changed my country on my tablet to France. Something I do when I’m writing long messages to French friends and can’t be doing with the predictive text making a nonsense of all I write.

Then I downloaded the Flipboard app. It was in French! Success. Sort of.

I really wanted to personalise Flipboard more or do this with Zite but as they both take your subject matter from your tweets and blogs, and the majority of mine are in English, I just don’t think it’ll work. Which is a shame. But I’m almost there. (and I will give it a go) In the mean time, I can select the subject categories I’m interested in. If I find out how to do it properly I’ll let you know.

It did make laugh though, I went from being ecstatic about all the resources I could find to being frustrated that they didn’t do as much as I wanted them to and wanting MORE. NOW. PERSONALISED.

And the Internet has made me this way. People in 2013 have higher expectations of the Internet and are constantly demanding more. What’s fantastic is the pace of change in technology and how it’s developing to meet this higher demand, and so I know that soon I will be able to have personalised content in another language.

And by then I will have moved the goal posts again, I’m sure.